Ah, memories of this Icelandic adventure with Dave Rudin and Nadine Stevens…send shivers down my spine. 😆 Because of the epic scenery, of course.

The clang of the age-old god speech /
May it forever play, young and free /
Under the northern lights… 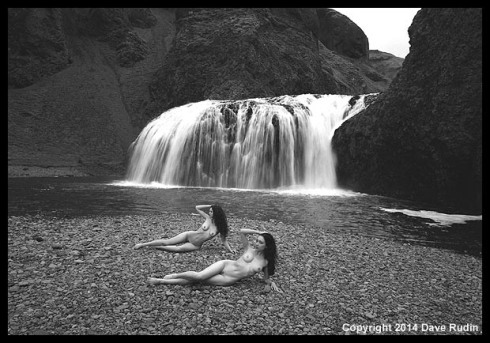 I’ve been away from posting for a couple of weeks (in part because I was away from home for a few days recently), so I’m coming back with a couple of photos of a couple of models in Iceland – Rebecca and Nadine.

These were made during my 2014 trip to Iceland, and I’ve posted some photos with Nadine there previously.  However, on the occasion of these photos, I was working with Rebecca for the first time.  She had been planning to visit Iceland from her home in England and very kindly arranged her schedule so that she could work with me for a couple of days.

The location is a well known waterfall located near one of the major towns on Iceland’s south coast.  As Rebecca had only arrived to meet us late in the morning, we had to make our photos here in the…

Dave Rudin has put together an epic calendar of his adventurous, billowing, northerly nudes on the magical island of Iceland. I feature in the autumn (fall) months – September (at Stjórnarfoss with Nadine Stevens), October (at Fjaðrárgljúfur) and November (atJökulsárlón).

Admittedly it’s a bit late to be shopping for a 2015 calendar, but you can look at the pretty pictures here: Figures of Grace 2015: Iceland.

Dave Rudin has put together an epic calendar of his adventurous, billowing, northerly nudes on the magical island of Iceland. I feature in the autumn (fall) months – September (at Stjórnarfoss with…

Hjerna, my adventures in Iceland with photographer Dave Rudin and model Nadine Stevens.